WWF Rage in the Cage (SEGA-CD) 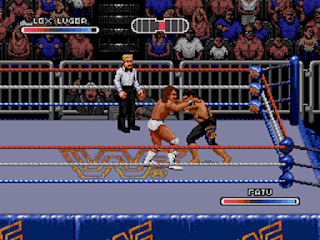 Genre: Sports
Perspective: Bird's-eye view
Visual: 2D scrolling
Sport: Wrestling
Published by: Arena Entertainment
Developed by: Sculptured Software
Released: 1994
Platform: SEGA CD / Mega-CD
But let's start with the good ones. The number of wrestlers is simply amazing - you can choose from 20 of the most magnificent fighters of your time. By the time the game was released, some of them were no longer in the ranks of WWF, and some were absent from TV channels for a long time, but at the time of the creation of the game they were the best. The roster is more than worthy (I deliberately mixed the fighters so that you read the list to the end): Crush, Tatanka, Bret "Hit Man" Hart, Mr. Perfect, Lex Luger, Rick Martel, Shawn Michaels, Razor Ramon, Randy Savage "Macho Man", Irwin R. Schyster (IRS), The Undertaker, Ted DiBiase "Million Dollar Man", Yokozuna, Kamala, Bam Bam Bigelow, Big Boss Man, Fatu and Samu Headshrinkers, Sags and Knobbs Nasty Boys.
A fabulous surprise for the fans was the FMV showing the signature moves of all 20 athletes! The match is accompanied by the voice of referee Howard Finkel - he goes all out. Add to this an excellent soundtrack of high quality - the atmosphere of the ring is conveyed incomparably, it's true.
You can choose one of four types of matches in the game:
And now, not about the most pleasant.
The limitation in the number of colors is strongly felt. If I made a game, FMV would only skip black and white. Color distortions are sometimes simply unbearable. I don't have much criticism of the drawn fighters, but if you can single out the most successful ones: Nasty Boys (Knobbs and Sags), Bam Bam Bigelow, The Headshrinkers (Fatu and Samu), then naturally, we can also name those who turned out not very well. And now for the crushing fact. The color palette was just ugly optimized and not used to the maximum. Even on SEGA Genesis, the photos of the fighters are more lively - well, where does that fit?
The game is made on the basis of the engine from WWF Royal Rumble, and this is not WWF RAW for you, so the disadvantages are the same. I am concerned about one question - where did Tag Team mode go? He is in all decent wrestling! The unoccupied 400 MB of disk space could be crammed with anything, but alas, the creators did not bother to occupy them with something useful. Let me remind you that WWF Royal Rumble has the opportunity to fight with steel chairs, and the Battle Royale match itself is one of the favorites of many fans. Where are they???
In summary, I would like to note that WWF Rage in the Cage could have been better, fortunately, there were plenty of resources for this. Let's write off all the shortcomings on the facts that we are facing the first wrestling in CD format and the only wrestling for the Sega CD! I highly recommend setting up a 6-button gamepad to feel the full power of the athletes.
‹
›
Home
View web version