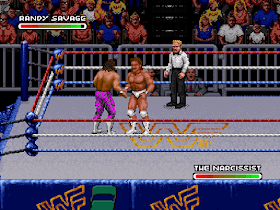 Genre: Sports
Perspective: Bird's-eye view
Sport: Wrestling
Published by: LJN
Developed by: Sculptured Software
Released: 1993
Platforms: Super Nintendo (SNES), SEGA Genesis / Mega Drive
Like its predecessor, WWF Super WrestleMania, the game is based on the American World Wrestling Federation. It highlights different types of matches including the new Royal Rumble. It also features wrestlers working for the WWF at the time, and each version of the game has its own five exclusive characters. It precedes the Sega Mega-CD game WWF Rage in the Cage and direct WWF Raw.

WWF Royal Rumble stages many movements. It also allows players to hit their opponents with a metal chair out of the ring. After striking the referee, who has become unconscious, forbidden shots such as strangulation are allowed. To avoid losing before the countdown, wrestlers must enter the ring; the entrance to the ring is on the left or right side.