Rise of the Robots (SEGA) 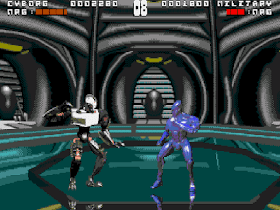 Genre: Action
Perspective: Side view
Visual: 2D scrolling
Gameplay: Fighting
Setting: Cyberpunk / dark sci-fi
Developed by: Instinct Design, Mirage Technologies (Multimedia) Ltd.
Released: 1994
Platforms: SEGA Genesis / Mega Drive, Super Nintendo (SNES), 3DO Interactive Multiplayer, DOS
This is a fighting game in which robots and cyborgs participate. The protagonist of the game is a cyborg, also known as ECO35-2 or "Coton". It is the most technological product of its time. He will have to fight with a wide variety of robots from an ordinary loader to the most ideal military robot. And all in order to stop the spread of the CEO virus, which Electrocorp introduces into its robots.
There are several game modes, including a two-player mode. You can also set the time of the battle and the number of wins required to complete the round.

Shoulder attack: DOWN, UP + strike
Pounce: BACK, FORWARD+punch

Roll: DOWN, UP + kick
Cut: BACK, FORWARD+kick

Butting: DOWN, BACK, UP
Super Jump: DOWN, FORWARD, UP