Rise of the Robots (SNES) 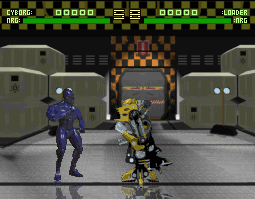 Fighting with robots. Your task is to turn your opponent into a pile of metal. To do this, you must actively attack, kick and wave with metal hands. There are no special interesting movements in the combat system, but in the game it's just amazing graphics and sound for Snes. After each fight, they show us the opponent's video, which also looks interesting. Recommended for fans of the genre and lovers to fight without navorachivaniya any bundles and combs.
This is a futuristic game made in the style of Street Fighter 2. You are a high-tech robot, and you will have to fight with your own kind. The first enemy will be a conventional loader, etc., until you fight with the most modern military robots.
I remember this game on PC, where it was just incredible for that time animation, sound and graphics. The authors of this version tried to fit into the game everything that was allowed to do 16 bits, and in my opinion they did it quite well.
‹
›
Home
View web version