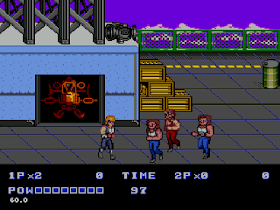 Genre: Action
Perspective: Side view
Visual: 2D scrolling
Gameplay: Arcade, Beat 'em up / brawler
Interface: Direct control
Published by: PAL SOFT
Developed by: Technos Japan Corp.
Released: 1991
Platforms: SEGA Genesis / Mega Drive, Arcade Machine, Nintendo (NES)
Continuation of the popular game about the brothers Double Dragon. Here, another adventure awaits them. This time the girl of one of them is killed. And now they have nothing left but to take revenge on the bandits. As always, they arrive late, and it will not be easy to catch up with the leaders. As for Sega, this Beat 'Em Up looks rather weak. And the game code is not very well optimized. There is also a two player mode.
‹
›
Home
View web version