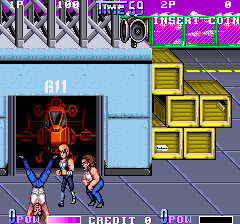 The game begins with the murder of Marian from the original Double Dragon leader of the Black Warriors grouping. Billy and Jimmy Lee go to make revenge.

In the arcade version, as in all ports, the gameplay is the same and is standard for Beat 'em up-games of that time. The player selects one of the heroes and, controlling it, passes the linear levels, methodically beating the attackers in groups of enemies. At the end of almost every level, the player needs to defeat the boss. The character can use foreign objects and weapons in battle, for example, sticks, pistols, bits. In the arcade version, the player can also replenish health by finding food in trash cans or boxes.
‹
›
Home
View web version