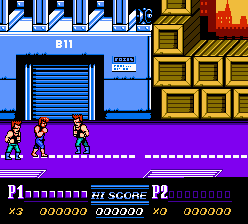 Genre: Action
Perspective: Side view
Visual: 2D scrolling
Gameplay: Beat 'em up / Brawler
Published by: Acclaim Entertainment
Developed by: Technos Japan Corp.
Released: 1989
Platforms: Nintendo (NES), Arcade Machine
So, waves of violence swept the city of New York immediately after the end of the nuclear war. Despite the fact that the criminal syndicates were gaining strength, two young men were brave enough to challenge them. Their names are Billy and Jimmy. People call them double dragons (Double Dragon), and our heroes have a terrible enemy. The battle with him was the goal, the task and, one might say, the fate of the dragons. One day the Shadow Warriors attacked the city and killed girlfriend Billy, who was called Marian. Now the dragons have only one goal - to avenge the death of the girl.If you remember, in the first game Double Dragon, scoundrels Shadow Warriors just grabbed Marian and kidnapped her. However, Billy managed to save her. This time they went even further, they killed her, and as you can see in the video scene, Marian is so cute. Perhaps, even you will be upset because such a beautiful girl died a terrible death. And there's no need to talk about Billy Lee. He is simply in a rage, and no obstacles can prevent him from adequately taking revenge on the Shadow Warriors.These disheveled scoundrels must be punished, so Billy and his brother are intent on lecturing these scoundrels, destroying them and thereby putting the streets in New York. It is here that you will meet various bandits armed with nunchuck.
Fight in dark and dangerous avenues, underwater tunnels. But nothing can stop the brothers, because they are brilliant in mastering the invincible martial art of the double dragon.And the story began, perhaps, no less terribly. The nuclear disaster erupted over New York, the city was captured by ruthless criminals, a gang of black Shadow Warrios, and no one can stand in their way. There are gangsters, swindlers, scoundrels and drug dealers all around. On the street, a normal person is practically impossible to get out. So our heroes face a very difficult task. They will have to fight with ninjas, karatekas, terrible bosses, disgusting giants, robots and other evil spirits.However, first of all they must go to the world-famous center for studying the martial art of the double dragon Double Dragon Dojo. Here students continuously train, study martial arts, gain strength, learn powerful fighting techniques, sharpen their art. However, the enemy also does not sleep. Bandits, apparently, are trained no less thoroughly. And now after the death of Marian, you must drive the bandits out of the city, and even better to kill. It's not an easy thing to do, so you have to use all the combat techniques that you learned: punching, kicks, elbowing, jumping attacks, hair-pulling throws and even special tricks such as Spinning Cyclone or Hypper Uppercut, and the more actively you fight with enemies, the more you will gain experience, master new techniques and become stronger and stronger.Having penetrated deep into the territory where bandits rule, you will have an even more difficult task, since you will have to operate in enemy territory, and sometimes get into such secret places that even gangsters do not dare to come forward, and therefore the enemies you meet here are real beasts. And only the soldiers of the double dragon have a chance to survive in this nightmare. That's how your adventure begins.In the course of the game, you will walk around different rooms, climb stairs, pass through doors.

Button A - punch.
Button B - kick.
Buttons A + B - Jump.
After a jump, pressing the button A or B, execute a Jump kick.
After the jump, at the highest point of the track, press the A or B button, then take the Cyclone Kick.
When landing after the jump, press button B and perform a powerful uppercut. By the way, this method can be performed in the initial phase of the jump. After the jump, pressing the buttons A + B at the moment of landing and at the moment of take-off, and also the button of the direction pointing to the enemy, perform a powerful attack by the knee of the Violent Knee Attack. This attack is quite difficult to perform, but if you succeed, the blow will be such that the sound of it resembles a shot, and your opponent will fly literally to the opposite side of the screen. Especially he is good against Abobo.
When you bring the enemy to the ground, then press the button on the D-pad in its direction and grab it by the Hair Grab hair. If you press the punch button, you will strike your knee in the face, and if you press the Kick button, you will toss the insensible enemy over your shoulder.Note. It is very useful to use this technique, if you are facing the cornice, then you can drop the opponents down and it will break to death.Pressing the direction button to the enemy + DOWN + Punch, you will elbow the enemy on the back of the head. Pressing the direction button to the enemy, the UP button and the Kick button, kick the enemy in the stomach and it will fly into the air.

Attack of Standing Knee. Sometimes, when you are near the enemy, press the punch button and hit him with the knee in the belly.
Duck. When you take a weapon or land after a jump, and at that moment the enemy attacks you with a throwing weapon, with the help of a dive you can dodge danger.
Sucker Punch. Perform a jump jump kick against the enemy dodging enemy, and as soon as you land, press the punch button to draw a powerful uppercut. From the first attack the enemy will surely dodge, but the uppercut will fall to him exactly in the jaw from below, as expected.
Violent Abuse. There are a number of powerful attacks against the defeated enemy, lying on the ground. Draw a combination of Hairgrab, Elbow, repeated elbow and finally kick. It's a deadly combination.
Bear Baiting. In the game there is a mode of two players, and in this mode you can stand on both sides of Abobo, thresh it, like a training pear. The scene resembles a bear, which is torn from both sides by two hunting dogs. The boss will not be able to defend himself, and of course, win a brilliant victory.
Surprise Attack. Unexpected attack is unusually effective. Perform Cyclone kick, standing in front of the door before the enemy is about to appear from her, and then, naturally, he will be greeted not by the friendly doorman, but by a powerful kick in the face.
‹
›
Home
View web version