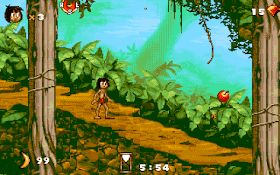 Genre: Action
Perspective: Side view
Visual: 2D scrolling
Gameplay: Platform
Setting: Asia, Fantasy
Published by: Virgin Interactive Entertainment
Developed by: Eurocom Developments Ltd, Virgin Interactive Entertainment
Released: 1995
Platforms: DOS, SEGA Genesis / Mega Drive, Super Nintendo (SNES), SEGA Master System, Nintendo (NES), Game Boy Color (GBC)
The cartoon and the game have little in common with Rudyard Kipling's original work. However, the game is based directly on the cartoon. A character raised by wolves needs to find a way to a human settlement. An evil tiger lies in wait for him, trying to harm, confuse and kill the main character. Mowgli will have to fight with wild animals, and goodies such as Baloo, Kaa and Bagheera will come to his aid. With Shere Khan, the boy will have the opportunity to clash in an unequal fight to the death at the very end of the game.
Mowgli is very athletic, fast, sharp and hardy. He can throw bananas at his enemies, fly on vines, climb trees, jump on his enemies' heads. The game has interesting bonuses, weapons. You also need to collect gems (the amount depends on the difficulty), which will help organize a meeting with Mowgli with any character. Also in the game there is a scoring, the number of some depends on the number of fruits and other units collected.
The game is divided into stages. They contain the core of the story. Before each stage, the goal is explained to the player. Sometimes it will be necessary to defeat the boss, in the rest of the stages (lasting for seven minutes) you will just need to meet friendly characters.
‹
›
Home
View web version