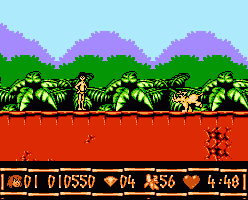 Genre: Action
Perspective: Side view
Visual: 2D scrolling
Gameplay: Platform
Published by: Virgin Interactive Entertainment
Developed by: Eurocom Developments Ltd
Released: 1994
Platforms: Nintendo (NES), SEGA Genesis / Mega Drive, Super Nintendo (SNES), SEGA Master System, Game Boy Color (GBC), DOS
According to Disney's cartoon "The Jungle Book", Virgin Entertainment (famous for SEGA "Aladdin" and "King Lion") released several games on different platforms, without bypassing NES. On the 8-bit adventure Mowgli succeeded superbly - Virgin at that time simply did not have bad games. A fun, fun platformer with a decent complexity and interesting gameplay. Is that the number of colors the graphics have been deprived of, but this game does not spoil at all. Mowgli wanders through the jungle for 10 levels, trying to get out to people. At each level, you need to collect a certain number of diamonds in order to go further. Time is limited, so you have to hurry. Enemies Mowgli beats bananas, throwing weapons and own weight. As the bosses there are characters of the cartoon.