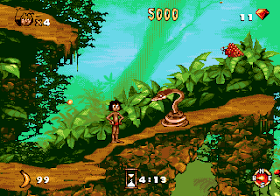 Genre: Action
Perspective: Side view
Visual: 2D scrolling
Gameplay: Platform
Setting: Asia, Fantasy
Published by: Virgin Interactive Entertainment
Developed by: Eurocom Developments Ltd, Virgin Interactive Entertainment
Released: 1994
Platforms: SEGA Genesis / Mega Drive, Super Nintendo (SNES), SEGA Master System, Nintendo (NES), Game Boy Color (GBC), DOS
Today we will talk about one of these games - The Jungle Book, its advantages, the gameplay and consider secret codes. So, let me introduce to you another 16-bit hit from Virgin Interactive - a company that became famous in the early 90's by releasing several unique pre-set games based on the themes of various Walt Disney cartoons. If you take a close look at the screenshot, which is located just below, then immediately notice the features of the author's signature handwriting: excellent expressive graphics and bright colors. Every detail, whether it's one of the characters or the background picture - all is so painstakingly and carefully drawn that it can be surprisingly endless. In addition to the beautiful appearance, it is also impossible not to pay attention to charisma and humor, which were so skilfully transferred from the big screen to the gaming one.The plot line is mostly similar to the one found in the original "Jungle Book". There are 9 game levels, each of which shows us a small portion of events from the cartoon: a meeting with Kaa, a walk down the river with Baloo and so on.About the gameplay. The product is a kind of mix of platformer with a shooter. Moving along the jungle and other difficult terrain, it will be necessary to shoot back from the wild beasts, which they dream of bodnut, scratch or bite poor Mowgli. Since our hero does not have real weapons, he uses everything that comes to hand: bananas, stones and so on.

The codes below are dialed in pause mode. In order to enter this mode, press the start button during the direct game actions:
‹
›
Home
View web version