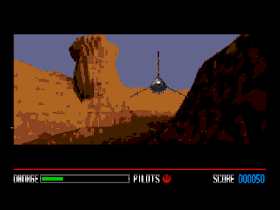 Genre: Action
Perspective: 1st-person, Behind view, Diagonal-down
Art: Video backdrop
Gameplay: Arcade, Rail shooter
Vehicular: Flight / aviation, Space flight
Setting: Sci-fi / futuristic
Published by: JVC Musical Industries
Developed by: LucasArts Entertainment Company LLC
Released: 1994
Platforms: SEGA CD / Mega-CD, DOS, 3DO Interactive Multiplayer
The game Star Wars: Rebel Assault tells us, as it were, an alternative development of the events of Star Wars "Episode IV: A New Hope", as well as some moments of "The Empire Strikes Back". The events, of course, are still the same, but the characters are already completely different. You play as Rookie One's rookie pilot, a Tatooine farmer who looks like Luke Skywalker. At the beginning of the game you will go through a short training, after which exciting battles await you. At the end of which you will meet with the Death Star. Part of the game is made with digitized FMV videos. The levels in the game are quite diverse, you have to control a spaceship, face clones face to face, with a third-person view. In the Sega Mega-CD version of Rebel Assault, Chapter 7 of the Imperial Probe Droids is missing.
The sequel to Star Wars: Rebel Assault II: The Hidden Empire has also been released, but for other platforms.
A similar Star Wars Arcade game but made entirely in 3D for the Sega 32x.
‹
›
Home
View web version