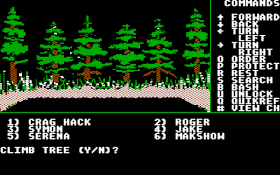 Genre: Role-playing (RPG)
Perspective: 1st-person
Pacing: Turn-based
Interface: Direct control, Multiple units/characters control
Setting: Fantasy
Published by: New World Computing
Developed by: New World Computing
Released: 1987
Platforms: DOS, Nintendo (NES)
Here it is, the game-progenitor of the great series and no less great offshoots. At the time when she was born, probably no one could have imagined what all this would lead to. Now the first question of a person who first saw an RPG that came out before the 90s would be “is it possible to play this?”. But first, let's try to look from the position of that time.
The first part of Might and Magic was released against the backdrop of existing quite successful games and even entire series, such as Wizardry, Ultima, Bard's Tale. Each of them already had a well-established world and backstory, and Might and Magic's laconic introduction read only: “This is a long journey that can last hundreds of hours. Happy adventures!"
In terms of graphics, Might and Magic: Book One was hopelessly inferior even to the first part of Bard's Tale, which was released two years earlier. But true connoisseurs of the world of Might and Magic know that the games in the series have never been distinguished by the use of advanced technologies, and we did not love them for modern graphics.
The mechanics of the game did not deviate much from the trends already established in the genre. A squad of adventurers wanders through pseudo 3D forests, fields, dungeons, reading important messages along the way, which are abundantly strewn with the walls of these dungeons. The area is densely populated by monsters, both living in certain locations and encountered randomly. When faced with a group of monsters, as in many games of the time, skirmish mode is activated, and the battle takes place separately from the adventure map. With magic, you enter only the level and number of the spell, so playing without an official manual that lists the names and descriptions of all spells is simply impossible (such is the natural copy protection due to limited media space). Savings only in hotels. And, of course, an integral element is the solution of riddles and charades with the input of answers in the form of text.
“Well, what is it about it that would make people play?”, You ask. I answer: the most important thing is a huge world and freedom. I will cite the same Bard's Tale as an example, because, in my opinion, this is the closest relative. Bard's Tale is just a collection of dungeons that are linearly connected to the story, and usually in the last level of the previous dungeon, you will learn a way to get to the first level of the next one. Might and Magic: Book One gives you such freedom that at first the question arises, but what, in fact, to do something? And only by the middle of the game, a set of small events begins to merge into a single plot form.
So, if you decide to play, let's get started. Your detachment begins its journey in the inn of the city of Sorpigal. The question that tormented you, what to do, disappears after the first attack of monsters. First you need to somehow equip yourself in the local forge. Where to get funds? The main source of income is the collection of trophies, always search the places of battles and other game events. As soon as you are ready for real adventures, the whole world is open to you. Explore the area, make maps, write clues on the walls. If you want to start with tasks right away, read the inscriptions next to the statues, listen to the clues in the Sorpigal tavern. In addition, local rulers live in castles. Lord Ironfist and Inspectron will ask you to tell about some places, distant and not so, or to deal with one of the problems for an appropriate reward. Lord Hacker, whose bins are already full of treasures, will offer to bring something. Tasks and riddles are quite diverse, and the world is quite colorful.
Of course, the game cannot be called the pearl of the series - there are few tasks, both plot and side, but this is only the birth of the world. Mediocre graphics and sound - turn on the appropriate music from the newer game. Keyboard-only control is a bit of practice, and you'll find it more comfortable than having to aim the mouse at the controls. There are no conveniences in the form of a car journal and car maps - but you don’t have to draw maps on scraps of paper, as you did before, there are more convenient tools. For example, Microsoft Excel, or similar from Open Office, is great for both maps and notes.
If you want to know how the phenomenon called Might and Magic began, then it's worth at least trying to play. And most importantly - in this part you do not leave the feeling that everything is still ahead and to be continued.
‹
›
Home
View web version