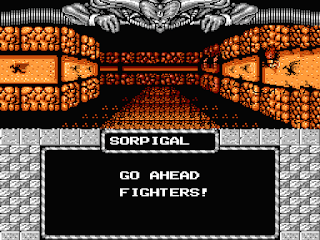 Genre: Role-Playing (RPG)
Perspective: 1st-person
Pacing: Turn-based
Interface: Direct control, Multiple units / characters control
Setting: Fantasy
Published by: American Sammy Corporation
Developed by: New World Computing
Released: 1992
Platforms: Nintendo (NES), DOS
The first of the famous Might & Magic series of games, the game was written in three years by almost one person - Jon Van Caneghem. Without a publishing company, Kaneghem organized his own and distributed the game for Apple II platforms himself, from his apartment, until he signed a contract with Activision.
For the NES, the game was developed in 1992; due to the great capabilities of the platform - slightly tweaked and with improved graphics. The game takes place in a fantasy environment, with magic, and knights, and then takes on a little fantastic features. A party of adventurers is looking for a certain "Sanctuary", meets with Corak and begins to look for a prisoner who escaped from a spaceship, disguised as a king on this world. The world itself, bearing the name VARN, stands for "vehicular astropod research nacelle".
Game with a first-person view, and moving around the squares (as, for example, in the Eye of Beholder). There are six classes to choose from for a team of six (Knight, Cleric, Robbers, Wizards, Paladins, Archers) and five races (Human, Elf, Half-orc, Gnome, and Awarf). Traveling through forests, caves and cities, travelers meet aggressive creatures and can avoid skirmishes, bribe monsters, surrender, or engage in battle with them. The game has been praised for its large and adventurous world.
‹
›
Home
View web version