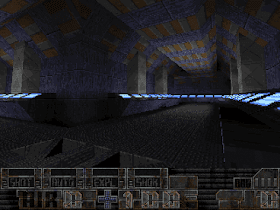 Genre: Action, FPS
Perspective: 1st-person
Gameplay: Shooter
Setting: Sci-fi / futuristic
Published by: Quantum Axcess
Developed by: Ratloop
Released: 1997
Platform: DOS
A total conversion for the Quake game, released after the release of Quake 2 as a kind of "alternative" to it. Unfortunately, she is extremely little known, but this only makes her more attractive.
Only two things make this game related to the "original" - the engine and the need for this very "original" to run. They have nothing else in common.
The world of Malice is a special, independent world, the world of a cruel future, where two hostile organizations actually rule the planet. Your hero is a simple (at least it seems so) mercenary of one of them. The game has internal cutscenes that shed light on the rich and interesting storyline.
The gameplay is also quite different from the "original" - even at an easy level it is quite difficult to play, and even at the highest ... The place of monsters in the ranks of your opponents was taken by various soldiers and robots with very powerful weapons and artificial intelligence, capable of kill with a couple of shots.
Do not expect a special variety of weapons, do not expect an abundance of first-aid kits and ammunition - this is not here. But expect surprises in equipment: from the Matter Atomizer, which allows you to pass through walls, to a mini-submarine.
Particularly complex "riddles" are not expected: the purpose of the mission, as a rule, is to find a way out. However, in addition to the huge number of enemies, you will often need finger dexterity.
Contrary to other "sequels", this game cannot be definitely recommended for Quake fans. Because playing Malice is much more difficult. But if complexity is your friend, then this is your game.
‹
›
Home
View web version