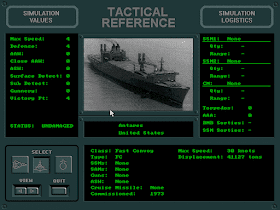 Genre: Strategy
Gameplay: Board game
Vehicular: Naval / watercraft
Published by: Avalon Hill Game Company
Developed by: Stanley Associates
Released: 1994
Platform: DOS
A step-by-step wargame on the topic of confrontation between the USSR and the USA during the Cold War, in this particular case, on the topic of confrontation at sea. Available scenarios include abstract combat in the Indian Ocean and Persian Gulf. There are only eleven (original) scenarios in the game, but there is some randomness in the placement of the enemy fleet, so in reality there is much more play space.
When playing alone, alas, you can only play for the USA, there is a mode for two players, and only there you can already choose Russians. By the way, in some scenarios that are already taking place in the early 90s, former Soviet ships are captured by Indians, Indonesians and others. The range of naval equipment presented in the game is exceptionally wide.
There are three types of objects available for control: surface ships, submarines, naval aviation. The gameplay is turn-based and divided into “days” (although in reality it is not twenty-four hours, but only eight), on each “day” each of the players can make three moves (one for each branch of the military); first one makes his three moves, then the other. Which type of troops to give orders in the first place - the player decides; if you wish, you can not make a move at all.
There are three game modes - strategic map, tactical and operational. Strategic - a map of the region of hostilities as a whole, tactical - the area of ​​operation, that is, some specific area, operational - a specific square or ship; they are all divided into the usual "hex" (each of them is equal to five miles in the game). Detailed information on friendly and enemy vehicles is available on the tactical map.
There are only two types of basic orders: moving ships (here the target is selected, although aircraft and submarines can simply be moved) and attack. During the attack, the weapon that will be used for it is necessarily indicated - rockets or torpedoes; a total of five weapons plus an air attack. Only one type of weapon can be used at the same time. Some scenarios are quite lengthy, in which case you will also have to be in charge of supplying your ships with ammunition. In most scenarios, this is not provided - so the rockets will have to be saved, which complicates the game.
The gameplay itself includes not only tactical planning and direct battles, but also sometimes a rather long search for the enemy fleet, so aircraft and submarines, which have much more opportunities to detect the enemy, should always be close to ships (after detecting an enemy ship or ships about them, you can immediately find out all the technical information). Unlike ships, aircraft can only be given orders while in the strategic map mode, and only of one kind - simultaneously moving somewhere and attacking something. Although there are pre-selected special orders for them - patrolling the territory or reconnaissance.
The interface is above average in terms of complexity, although it is still much simpler than in some similar games. Naturally, as in the vast majority of wargames, graphic beauties here can only be expected from the landscape, but since the action takes place on a “monotonous” sea, there are almost none of them; all troops are depicted by conventional icons. However, this is exactly what is needed for such a game, especially considering that it was made according to a board game. But what's really cool here is the rare animated cutscenes (such as a fragment of a battle or a shipwreck) and just an incomparable main menu depicting the command post of the main ship, which makes you remember the old action movie "A Case in the 36-80 Square".
‹
›
Home
View web version