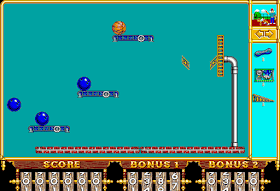 Genre: Puzzle
Perspective: Side view
Visual: Fixed / flip-screen
Interface: Point and select
Published by: Sierra On-Line
Developed by: Dynamix
Released: 1993
Platforms: DOS, 3DO Interactive Multiplayer
Logic game is a legend. The essence is very simple - you need to solve problems like "scatter the balls into boxes", or "make the mouse fall into the hole", or "break the aquarium and throw the basketball ball into the trash", well, or - "launch the cat into space".
The next task is solved on a two-dimensional screen, side view, which painfully resembles school lessons in physics. "A body with mass m moves along an inclined plane..." But only the tools proposed for solving make the process hundreds of times more interesting than school lessons, the absurdity of what is happening sometimes touches utterly, and the complexity of the puzzles makes you bang your head against the wall with the words "Well, this Incredible! Impossible!
Incredible car! The ball rolls down an inclined plane, jumps over an abyss and pushes a bucket that falls off the board. The bucket is tied with a rope to the handle of the poster; as it falls, it pulls on the rope, and the first sheet comes off the poster, revealing the image of a banana on the poster. A nearby monkey notices a banana and starts running after the banana and spinning the treadmill he is on. This turns the shaft, which is belted to the clown in the snuffbox. The snuff box with the clown opens in a few seconds, the clown jumps out of the snuff box and catapults the boy sleeping on the lid of the snuff box to the pedestal, where he wakes up and finds his house on the right. The boy tries to go to him, but stumbles upon silicon, creates a spark, from which the straw ignites. Light from a burning fire is focused through a magnifying glass and creates a beam that ignites the fuse on the rocket. The rocket launches into the launch bay, breaks through the aquarium on which the cat is sitting, and ejects the cat into outer space.
...Unbelievable, isn't it? You have to solve hundreds of similar puzzles - from simple to very difficult. Before you will be an unfinished machine, the purpose that it must fulfill, and a set of tools that (and perhaps not all) will allow you to complete it and complete the task. At your disposal will be all sorts of devices - balls, boxes, boards, rockets, lasers, electrical outlets, hair dryers, toasters, timers, buckets, airships, matches, dynamite, nitroglycerin, ropes, scissors, cat, mouse, cheese and even an anti-gravity generator. And here is hardly one tenth of what your Incredible Machine will consist of!
The simple levels of the game are fun and intuitive, and even come with hints. Gradually, the levels become more difficult, and the hints are given more blurry. The humor of the creators and the incredible feeling that comes when you solve the next puzzle (“it was SO easy”) will not let you get bored, and the ability to play with friends both in “cooperative” mode (solving puzzles together) and against each other (performing one action after another, in turn) makes this game no less interesting for companies.
If you liked playing building blocks as a child, spinning a dynamo or shooting from a solenoid gun, drawing various installations or inventing superweapons, if you just like harmless humor or launching fireworks, or maybe you are a pyromaniac and want to blow up the whole world - in anyway, this game is for you!
The Incredible Machine is the game that started it all. Primitive graphics of 16 colors did not prevent the game from becoming interesting, and in the future the game has hardly undergone any changes, except for graphic and sound improvements.
‹
›
Home
View web version