The Incredible Machine (3DO) 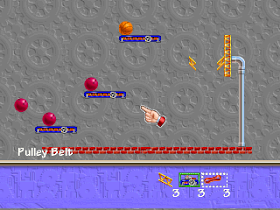 Genre: Puzzle
Perspective: Side view
Visual: Fixed / Flip-screen
Published by: Dynamix
Developed by: Dynamix
Released: 1994
Platforms: 3DO Interactive Multiplayer, DOS
Welcome to the world of incredible mechanics! In The Incredible Machine (abbreviated TIM) we have a unique opportunity to create weird, fantastic and crazy devices from the most common objects. Want to learn how to weld coffee with scissors, a laser and a leaky can with paint? Or turn on the light through the lilliput, rope and three rockets? You are welcome! And if you mention that in the game you can change the atmospheric pressure and even the force of attraction ... Our creative freedom is limited only by flight of imagination! At TIM, there are 208 fascinating tasks for an individual solution - as ingenious as they are insane. In the world of "Incredible mechanics" there are dozens and even hundreds of possible solutions to each problem. It is possible that as a result you will find such methods, which no one had ever guessed before!
The Incredible Machine is a series of technological puzzles, originally developed by Kevin Ryan. A modern electronic implementation appeared thanks to Jeff Tannel from the now defunct Jeff Tunnell Productions. Since October 2009, TIM is the intellectual property of PushButton Labs, run by Jeff Tannel.
If you start to paint all the gameplay, then it will not be interesting to play. It is very important for you to understand the possibilities of dozens of diverse subjects. The Incredible Machine has to creative thinking. Depending on the chosen mode, the player is given a certain amount of, at first glance, completely incompatible things, and the task is to collect from them something useful. Particularly outstanding personalities can immediately launch the "God mode", and from 60 different types of objects to make an immortal creation. Well, beginners can take on something very simple, and under the guidance of an invisible teacher quickly succeed. After all, we will not only collect devices, but also run them, and it's so fun :) Also there is a built-in hint system.
Mania to strange devices is known for a long time. In various countries around the world, hundreds of eccentrics gathered their frankenstein. Most of all, for some reason, the American sculptor, writer, engineer and inventor Ruben Lucius Goldberg (1883-1970) is mentioned. World famous for him brought quite popular cartoons and cartoons in which the "Gold Rubber's Machine" was shown - a complex, bulky and confusing device that performs very simple functions. Any child is familiar with such a cartoon by Tom and Jerry and the third part "Back to the Future".
Let's get acquainted with the original.
The Incredible Machine (1992, PC-DOS, Macintosh, 3DO, FM Towns, PC-98, Xbox 360).
Few people know that the idea of ​​a puzzle was developed within the walls of Electronic Arts to see the light in 1984 on the Commodore 64, but at that time Dynamix (including Kevin Ryan), assigned to the task, worked on Arcticfox, the first original game for the Amiga, so the development did not begin until the spring of 1993. PC and MAC versions are generally identical, although, in the brainchild of Jobs music is steeper.
3DO: This is the only game available for the game console. The release is very mixed. On the one hand, a turbulent multicolor (versus 16 EGA / VGA original colors), high-quality music, but on the other - a somewhat inhibited control (with a mouse more convenient), a lower screen resolution, and as a consequence, the need for scrolling, other music. But the number of puzzles is just a record - 208, added a 3D introductory video, voice support. The interface had to be greatly simplified, so that it fits on the screen. As it seemed to me - it only went to the benefit. In the Japanese version, in addition to the hieroglyphs, the voice was replaced. You've probably heard it, such a girl, slim, animeshny.
TIM adore many, it's true, and the ratings of the game are very worthy. In 2009, it can be downloaded on the Xbox Live Arcade service.
Incredible Machine has more than a dozen imitators and sequels, and it's not surprising.

Before you appear images of various objects and beings, somehow related to each other. It is necessary to grasp these relationships (the Cat of the Dogs makes Mort's mouse run, and getting Light on the Lense lights the Bickford cord) and use these dependencies to perform one of 208 tasks.

Build a car on the right so that it is a mirror image of the left one. Be sure to change the position of the motor to a mirror, otherwise the bowling ball will fly to the right.

The bowling alley on the left side should be placed on the motor connected to the first conveyor belt. Each subsequent ball must be moved to the right before collision with another motor connected by a belt to the conveyor above it. It is necessary so to put a ball on a belt that at start of the conveyor it fell directly into a ring.

Practice using the bellows. Paint the bottom ball on the scissors.

Experiment with the swings. Place the swing under all the balls so that each ball that starts the ball collides with the next one.

The lower the mechanism, the higher you can throw a basketball. Place the two mechanisms on the right, and the last one - just to the left of the grid. Make sure that the ball falls exactly on the mechanism.
Seventh stage - Attack of the clown
Connect the top motor to the clown in the middle box. Throw the ball up and make it collide with another motor connected to the clown under "Bob the Fish".

Milling in the mills

A bucket without a handle

Throw the ball at a pair of scissors, which you hung on the first to the left of the rope. The right baseball should be dropped on the throwing mechanism located just below it, so that it jumps and collides with the scissors on the right.

Similar to a hurricane

Place the toggle mechanism under the right switch, to the left of the fan. A baseball, falling on a springboard, will jump and hit the switch that will start the fan. The balloon will blow to the left and it will turn on the middle fan. At the end, place the fan to the right of the lower left switch.

Place the mill to the left of the fan and connect it to the top generator. Now place the electric motor behind the socket and connect it to the conveyor belt. If necessary, turn the motor over so that the connector is on the right, otherwise the belt will turn in the wrong direction. Basketball should be rolled to the right of the motor, which must be connected to the generator to the left of the tennis ball. The fan should blow the ball into the pipe.
‹
›
Home
View web version