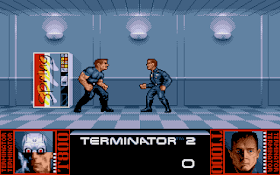 Genre: Action
Perspective: Side view, Top-down
Visual: 2D scrolling
Gameplay: Beat 'em up / brawler
Setting: Sci-fi / futuristic
Published by: Ocean Software Ltd.
Developed by: Dementia
Released: 1991
Platforms: DOS, Nintendo (NES), SEGA Master System (MS), SEGA Genesis / Mega Drive
There are eight levels in the game, each of them is a “cast” from a specific episode of the film, there are three “types” of levels in total: a fighting game with a side view (in the role of the T-800 we fight with the T-1000), racing with a top view (we drive on a motorcycle or a car from the T-1000 or the police) and, oddly enough, puzzle levels where we need to repair the T-800.
Graphically, the game is beautifully executed, but the action is not particularly dynamic. In principle, it is interesting to play, but the abundance of much better games based on this film make this game attractive only for fans.