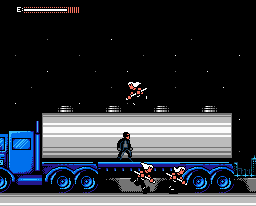 Genre: Action, Racing / Driving
Perspective: Side view
Gameplay: Arcade, Fighting, Platform, Shooter
Published by: LJN
Developed by: Software Creations Ltd.
Released: 1993
Platforms: Nintendo (NES), SEGA Master System (MS), SEGA Genesis / Mega Drive
In the cult blockbuster with Schwarzenegger in the role of a robotic killer could not release the game. Were you able to reproduce it in the atmosphere of the film? Probably not. Arnold's character is very small (the first boss three or four heads above it), it may thrash the usual fists Gopnik. T-1000 also does not inspire respect, only irritation - a half-game runs you like a bound, shooting attacks on a bit. And while riding on a motorcycle, you can not die in Terminator - in the blink of an eye. But despite the obvious flaws, the game still has to itself. Excellent image drawn characters, and cutscenes, directly copying a movie, any fan of Terminator 2 will delight. The fact that the developers have not forgotten the oath robot "not to kill", is also pleased. A controversial, but generally worthwhile game.

↓ - squatting;
A - jumping up;
B - punching;
Go from stage to stage of the Terminator can only after all his opponents have been killed. It is especially difficult for him at the beginning of the game, when a formidable robot is armed only with his fists, but the Terminator sits on a motorcycle and finds a powerful weapon.

Crash all on your way you make your way to the bar.
Aggressively minded opponents are most convenient to kill, standing on the bandwagon of the truck.
When moving forward, you will be disturbed by rockers on motorcycles, try not to get them under the wheels.
After killing several fighting guys in the bar, you will meet with the bully, who, having received a punch with his hand, jokes with amusement. After seven such strikes, he finally stops doing it.

Sitting on a motorcycle and picking up a gun, you continue to search for John Connor.
Going around the cars and destroying the crumbling boxes, you drive up to the gate, which opens with an accurate shot. This is where the enemy T-1000 robot appears and will pursue you until the end of the game.
After breaking through the four gates and tearing yourself away from catching you on the truck T-1000, you finally see John Connor.

Your task is to find in the hospital the mother of John Sarah Connor.
To do this, you need to get to the sixth floor from the first floor, where Sarah is in the third room to the right of the elevator.
You need to find both the key to the room, and the elevator that rises upstairs, going into all the rooms and simultaneously replenishing weapons and energy.
Do not forget also about your promise to John not to kill people. Therefore, before you shoot, sit down, so that the bullets will fall into the legs of the policemen following you and some loonies with sticks. The more you stack your opponents, the better weapons you'll get at the end of the mission.

It is necessary to blow up the laboratory.
To do this, you need to collect ten bombs and, given that you can not carry more than three at a time, fold them in a box on the sixth floor. The bombs themselves are on different floors under strong armed guards. To put the bomb, press ↓.
And by laying bombs for the explosion, at a pace run to the elevator.

You get to the steel plant.
Move to the right, jumping over the molten metal and dodging the hot drops and escaping steam.
"Kill" T-1000, jump on the swinging hook and run further. Again, "kill" the T-1000, again forward and upward.
After a long run you will come to two large boilers, from which the molten steel flows. And again the not-finished T-1000 is here. You need to jump on it, gradually throwing it back until it falls into the cauldron. Now you have killed him forever.
Jump on the hook, from it to the left boiler, from the boiler again to the left. And there you are already waiting for John and his mother.

You can kill enemies not only with shots and fists, but also jumping on their heads.
At the second level, fighting off the truck that's chasing you, shoot the fourteenth (the last one) a broken car, and a sign "T-2 date" will pop out of it. If you have time to intercept it, then get CONTINUE.
The third stage provides an opportunity to change weapons. If, without killing doctors, go through stage 3, then at the end of the level you will be able to choose weapons to your taste.
It is useless to kill the T-1000 in a hospital and a laboratory, it will again and again appear. It is better to climb on the table, and he "roll away".
To use the elevator, you need to find the CARD. That's where they are, as well as some other prizes. (Everything is considered in space relative to the elevator).
1st floor. In the first door on the left is CARD, and in the second - energy.
2nd floor. On the right in the second door is CARD, and in the third - additional cartridges.
3rd floor. In the first to the left of the door - energy, and in the third on the right - CARD.
4th floor. In the second door on the left - cartridges, in the fourth on the right - life, in the fifth on the right - CARD.
5th floor. CARD in the fourth door on the right.
6th floor. In the first door on the left - ammunition, and in the third on the right - cartridges and your goal - Sarah Connor.
If GAME OVER appears, press and hold the SELECT button - you will receive CONTINUE.
The number of bombs on each floor (Stage 4). 1 floor - 2 bombs, 2 floor - 2, 3rd floor - 3,4 floor -1,5 floor - 2 bombs.
‹
›
Home
View web version