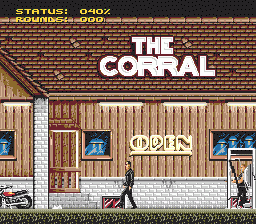 Genre: Action
Perspective: Side view, Top-down
Gameplay: Fighting
Setting: Sci-Fi / Futuristic
Published by: Flying Edge
Developed by: B.I.T.S.
Released: 1993
Platforms: SEGA Genesis / Mega Drive, SEGA Master System (MS), Nintendo (NES), DOS
In the future, humanity was almost destroyed by its own creation - the Skynet computer system, which launched nuclear missiles. After the war, the robots began to destroy the survivors. However, there was a man who raised an uprising against cars and taught people to fight and destroy cars. To more effectively destroy people hiding from sensors and radar robots underground, models of cyborgs and Terminators were developed, and one of them was sent to the past in order to kill John Connor when he was her child. The games are made in films with Arnold Schwarzenegger in the lead role.
What to say? The film is better. Much better, especially compared to the first part of the game.
For fans of the Terminator I will advise another game - Robocop vs. The Terminator.