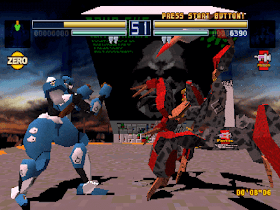 Genre: Action
Perspective: 3rd-person
Gameplay: Fighting
Setting: Sci-fi / futuristic
Published by: Time Warner Interactive Inc.
Developed by: Zoom
Released: 1995
Platform: PlayStation (PSX, PS1)
Martial arts games created using 3D polygonal graphics are becoming more and more popular among players, especially those who were not previously interested in this genre. The most striking phenomenon of this kind was Namco's Tekken game. But the small company of Japanese developers Zoom, known in the past only for the rather standard shooting game in the Phalanx game and the G2 fight game, also made a noticeable contribution. However, Zero Divide is a game that is undoubtedly made at a higher level.
Of course, the first thing that catches your eye is the great graphics. But as the game progresses, you begin to realize the merits of the overall composition of the action, to encounter a host of new, most interesting details of martial arts. Of course, a lot here is borrowed from another famous game - Virtua Fighter (which is not bad in itself), but still far from a repetition of what has already been seen. Perfectly used, for example, the ability of the PlayStation to create "transparent figures". When one of the fighters - robots receives damage to any part of his body, this part becomes transparent! In principle, this technique can be canceled, but it is so impressive that it is better to leave it. Another interesting fight is connected with those moments when a fighter falls out of the ring. He has the opportunity to cling to the fence of the ring and hang for a while; and when a careless opponent approaches to finish you off, you can make a sharp dash back into the ring with a simultaneous strike! There is also a secret character in the game - the Boss named X-TAL, who is actually the "responsible organizer" of the Tournament, but for the time being is not shown. Only when all the main fighters have been completed does he appear in the form of a kind of “brain on spider legs”. In the meantime, you are playing the game on Hard difficulty, his voice caustically comments on what is happening in the ring; if these comments annoy you, you can turn them off too. We can say that the fighter control system here is in many ways even more convenient than in Tekken or Virtua Fighter. First of all, it is more understandable and can be more easily mastered by inexperienced players. You can even say that the fighting techniques are more natural and more realistic. The presence of the Block button allows you to interrupt many of the opponent's moves, and in combination with punches or kicks, you can create wonderful combinations. It is enough to press Block and Punch, being close to the opponent, to make sure of this.
Finally, the game provides a replay mode that allows you to play the most interesting moments of the fight, and write the most successful tricks to a memory card and brag to your friends. At the same time, you can view the battle from four different angles, as well as in Free mode - with influxes and wastes, panning left and right, etc.
Especially highlighting the clear, expressive character animation, colorful 3D graphics and exciting gameplay - we can safely say that Zero Divide is a very good entertainment for fans of this genre.