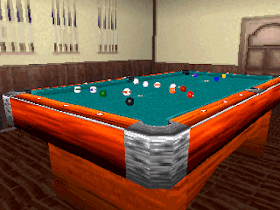 Genre: Sports
Perspective: 1st-person
Sport: Pool / snooker
Published by: Data East Corporation
Developed by: Data East Corporation
Released: 1998
Platform: PlayStation (PSX, PS1)
The first part, released back in 1987 for slot machines and later ported to a number of home consoles, is called "the best billiards simulator ever released on any system." This was followed by the second part and in 1998 - the third. Originally the third (and last at the moment) game developed for the SEGA Saturn platform, and then ported to the PlayStation. This is the first game in the series to be created using polygon graphics (you can also play the classic version from above). In Side Pocket 3, you take on the role of Kyoko Sone, a professional billiards player. There are more than enough game modes: Story, Training, Trick Game Mode and Versus Mode. Almost all varieties of billiards are represented in the game, except that there is not enough snooker - Eight Ball, Nine Ball, Rotation, 14.1 Continuous, Bowlliards, Cutthroat, Carom Billiards, Poker, Pocket game and Yotsudama.
‹
›
Home
View web version