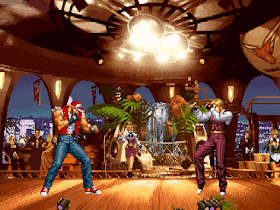 Genre: Action
Perspective: Side view
Visual: 2D scrolling
Art: Anime / Manga
Gameplay: Arcade, Fighting
Published by: SNK Corporation
Developed by: SNK Corporation
Released: 1997
Platforms: PlayStation (PSX, PS1), Neo-Geo
If you search for a list of SNK games, you'll be blown away by the number of fighting games they still release. The same KoF not so long ago passed the number 14. Probably, at one time SNK decided not to oversaturate the rest of the world with their two-dimensional games, so '96 (and the three subsequent ones) did not come out outside of Japan. And so something in vain. Connoisseurs of the series suggest that, compared to '95, this game is much closer to the arcade original and the animation is better here. And if you are a simple passer-by, to be honest, you are unlikely to notice the difference with the naked eye.
‹
›
Home
View web version