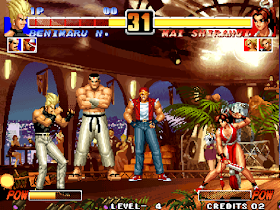 Genre: Action
Perspective: Side view
Visual: 2D scrolling
Gameplay: Arcade, Fighting
Art: Anime / manga
Published by: SNK of America
Developed by: SNK Corporation
Released: 1996
Platforms: Neo-Geo, PlayStation (PSX, PS1)
This is another fighting game in The King of Fighters series. Here we are already moving on to 1996. A new splash screen immediately stands out, which undoubtedly decorates the game. As before, the best fighters in the world receive invitations to the tournament. Now a team of three players can be assembled by one of the twenty-four people presented. Previously, one had to choose from already formed groups of people. The graphics are a little better. Special attacks of players delight the eye with their beauty. The new stages, as before, are dynamic and full of different colors of the rainbow. Now the fighters got the opportunity to run around the stage, and do not move by jump-off, as it was before.
‹
›
Home
View web version