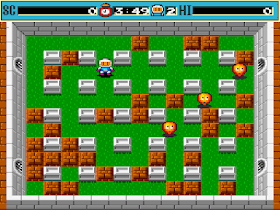 Genre: Action
Perspective: Top-down
Visual: Fixed / flip-screen
Gameplay: Arcade
Interface: Direct control
Setting: Sci-fi / futuristic
Published by: Ubi Soft Entertainment Software
Developed by: Hudson Soft Company
Released: 1992
Platforms: DOS, TurboGrafx / PC Engine, Nintendo (NES), PlayStation (PSX, PS1)
Widely known since the NES era, a series of arcade games. This particular revision was also released on many other platforms, including the PC Engine, Turbografx-16, and Amiga. The DOS version may not be the most outstanding among them, but it is no less remarkable for that.
The main character will have to go through 64 levels (eight locations, eight stages each) of a square and rectangular variety with increasing difficulty, using the only available weapon - bombs - with the goal, as has been the custom since the days of Super Mario Bros., to save the local princess from the hands evil antagonist. As you progress, it is possible to upgrade basic skills due to bonuses of different varieties that are hidden under the blocks. The rollers speed up walking, the flame increases the damage range, the bomb adds the ability to put more of these items one piece at a time. Over time, it will also be possible to bypass flimsy varieties of barriers without undermining them. The hero may well be blown up by his own bombs; as a result, the layout should be done carefully, otherwise you will have to start the level again. At every eighth level, a boss awaits, after defeating which the landscape takes on a different color and new types of enemies appear - more and more colorful varieties, each of which has its own characteristics, ranging from appearance to speed and manner of movement and the number of points given for its destruction. The main goal in this case always comes down to finding a portal to the next level, which can only be entered after the destruction of all opponents. Moreover, if all enemies are killed, and some bonuses are not found, then the blocks under which they are hidden will be highlighted. There are no saves based on the model and likeness of games on the NES. A complete passage with due skill can take about two and a half hours, otherwise it is appropriate to use codes to download from a certain level.
The game, unlike its fellow Atomic Bomberman, is designed primarily for a single passage. Thanks to colorful graphics, a vigorous eight-bit soundtrack and moderate hardcore, it can be enjoyed not only by children.
‹
›
Home
View web version