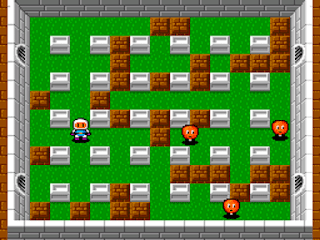 Genre: Action
Perspective: Top-down
Visual: Fixed / flip-screen
Gameplay: Arcade
Interface: Direct control
Setting: Sci-fi / futuristic
Published by: NEC Technologies
Developed by: Hudson Soft Company
Released: 1991
Platforms: TurboGrafx-16 (TG-16), Nintendo (NES)
Good old Bomberman. The principle is the same: explode to survive, but the game has something that all Bomberman lacked - this is history. They kidnapped the daughter of the professor, your creator, and now, you will go to save her. The graphics are impressive compared to the NES, the sounds are the same. Many new monsters. As the game progresses, you can receive bonuses - speed, increased strike radius, increased number of bombs, and others. After several levels, you meet the boss.
‹
›
Home
View web version