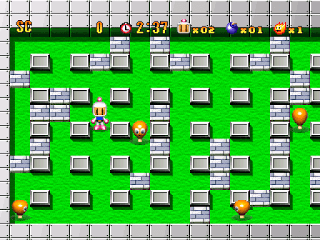 Genre: Action
Perspective: Top-down
Gameplay: Arcade, Party game
Interface: Direct control
Setting: Sci-fi / futuristic
Published by: Vatical Entertainment LLC
Developed by: Metro Corporation
Released: 2000
Platforms: PlayStation (PSX, PS1), Nintendo (NES), TurboGrafx-16 (TG-16), DOS
The Bomberman Party Edition comes to the PlayStation with simple, classic gameplay that players in the series love from 1983, namely destroying enemies by planting bombs near or in their path. There is only one difficulty - you do not have much time to deal with current opponents at this level (classic labyrinths), so tactical thinking is fully involved here, and various bonuses are scattered on the level (in particular, time stop or the ability to pass through walls), will help you. There is a mode against a real player, and if there is a multi-tap, up to five players can participate in the game. Of all the games in the Bomberman series for the PlayStation, Bomberman Party Edition is the closest to the original, which should please fans of the series. And remember, everyone is equal in front of the bomb, do not be near at the time of the explosion of your own bomb!
‹
›
Home
View web version