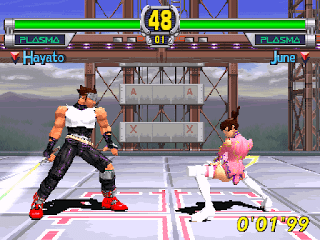 Genre: Action
Perspective: 3rd-person
Gameplay: Fighting
Setting: Sci-fi / futuristic
Published by: Capcom Entertainment
Developed by: Capcom Co.
Released: 1996
Platform: PlayStation (PSX, PS1)
This great fighting game was created by the developers who previously gave us the well-known series of games in this genre - Street Fighter. The programmers at Capcom have been saying all along that they will stick to the old ways of animating characters until they master the 3D technology in detail. And now, it seems, they have overcome this barrier, and significantly surpassed Battle Arena Toshinden 2, an arcade game that Capcom licensed while working on their own brainchild. Now all attention is focused on Star Gladiator (there is already a sequel to this game, but, unfortunately, not on PSOne).
From the very first frames, the developers let us know that they are opening up completely new horizons that cannot be compared even with their most desperate past games - Mega Man or Ghouls and Ghosts. Predators act here instead of Japanese schoolgirls, robots instead of Indian gods. As in Namco's highly entertaining Soul Blade (Soul Edge) game, the brawlers wield quite serious weapons here - axes, spears, and daggers. A character named Zelkin swoops down on his opponents, knocking them down with his wings; Gamof is a stocky robot wrestler who simply cuts enemies apart with a heavy ax dangling from under his arm. Sometimes, however, fighters resort to the usual punches and kicks. Sometimes it is not entirely clear how exactly one or another technique should be performed. But it is unlikely that the developers have significantly deviated from the usual six-button control system from the controller, so the tricks are clearly borrowed from many other similar games.
During the fights, some Gladiators now and then undergo various transformations - for example, they grow to incredible sizes. Often fights are shown in very unexpected foreshortenings; close-ups are especially effective when one or another character exhales a sheaf of flame.
Graphics, sound and the number of game modes will allow you to get the most out of the game.
‹
›
Home
View web version