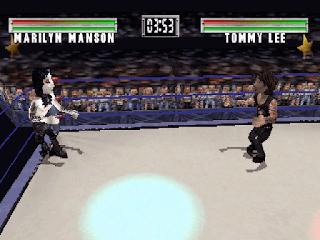 Genre: Action, Sports
Perspective: 3rd-person
Sport: Wrestling
Published by: Gotham Games
Developed by: Coresoft
Released: 2003
Platform: PlayStation (PSX, PS1)
Celebrity Deathmatch is a killer celebrity fights in cartoon style. The showdown of 20 colorful world-famous stars - Marilyn Manson, Carmen Electra, Anna Nicole Smith, Tommy Lee, Dennis Rodman, Nsync and many others - takes place on colorful arenas to the accompaniment of well-aimed comments by some Johnny Gomez and Nick Diamond. Hidden characters will also delight you with their presence: a werewolf, a mummy, the inimitable Frankenstein and the cheerful commentators themselves. All fighters have their own unique punches, moves and combinations. You can also create your own celebrity and put her on a podium with elbows, claws, teeth and all the limbs of the body. How to become a star? The answer is simple: star between the eyes of another star.
‹
›
Home
View web version