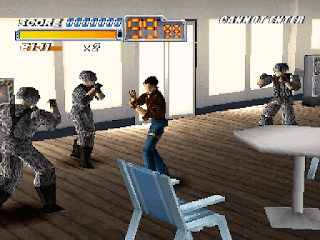 Genre: Action
Perspective: 3rd-person
Gameplay: Beat 'em up / brawler
Published by: Bandai Co.
Developed by: Soft Machine
Released: 1998
Platform: PlayStation (PSX, PS1)
A state-of-the-art cruise ship is hijacked by a group of terrorists who take passengers hostage and promise to blow up the ship. At your disposal are 4 fighters to choose from, with the help of which you will clear the ship of stowaways, making your way to the leader of the gang. Each hero has his own unique combat experience, as well as special and combo attacks. Also, each hero has its own storyline and a set of Bosses, which allows you to go through the game several times (for each hero separately). There is also a cooperative mode with a choice of passing from 2 teams (each team also has its own storyline and a set of bosses). In the fight against terrorism, in addition to fists, improvised items are also used - benches, garbage cans, knives, firearms and other means scattered around the level.