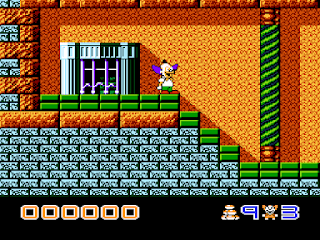 Genre: Action
Perspective: Side view
Visual: 2D scrolling
Gameplay: Puzzle elements
Published by: Acclaim Entertainment
Developed by: Audiogenic Software Ltd.
Released: 1992
Platforms: Nintendo (NES), SEGA Genesis / Mega Drive
The player controls Krusty the clown in horizontally scrolling scenarios in his goal of destroying all the rats that have invaded his Krusty Brand Fun House, each level includes a set number of rats. Using different objects, Krusty must pave the way for the rats and guide them to the device that will destroy them. In each level, these devices are controlled by different characters including Bart Simpson, Homer Simpson and Sideshow Mel. In each level there are also other creatures such as snakes and flying pigs that will attack Krusty; to defeat them the player can throw cakes at them.
‹
›
Home
View web version