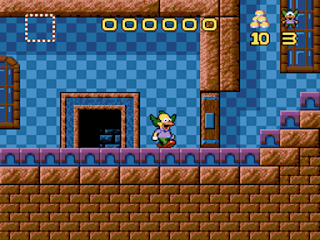 Genre: Action
Perspective: Side view
Visual: 2D scrolling
Gameplay: Puzzle elements
Published by: Flying Edge
Developed by: Audiogenic Software Ltd.
Released: 1992
Platforms: SEGA Genesis / Mega Drive, Nintendo (NES)
One of the games in The Simpsons series. In this game you have to help Krusty the clown from The Simpsons cartoon. The fun house was besieged by vicious rats. And you have to help Krusty get rid of them, but it's not that simple, they even wanted to call the game Rat-Trap. This game is a mixture of Platformer with Puzzle and logic game. In order to get rid of the rats, you will need to think carefully about what needs to be done to drive them into a huge mousetrap, which is controlled by Brother Simpson. To do this, you will have to take the cube, standing on top of it and press the button down. Now you need to place the cube in a special place by pressing the down button as well. Then watch how the rats will go to certain death. A little sadistic game. So you have to move from room to room solving various puzzles.
‹
›
Home
View web version