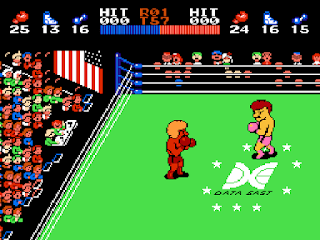 Genre: Sports
Perspective: 3rd-person
Gameplay: Arcade
Sport: Boxing
Published by: Data East USA
Developed by: Wood Place Inc.
Released: 1987
Platform: Nintendo (NES)
The game has three game modes:
Before starting the game, you need to create your character and set its initial abilities: strength, speed and endurance. Each battle won only slightly increases these abilities (they are displayed at the top of the game screen during the battle, strength is represented by a boxing glove, speed by a boot, and stamina by a silent bell). Each hit weakens the opponent's strength, which can only slightly recover during the break between rounds. After a series of accurate strikes, a quick knockout occurs, but usually it takes quite a lot of hits on the opponent before he is on the floor of the ring.
In addition to the single-player mode against the computer, Ring King also has a two-player mode where you can play against each other. After each battle won, a password is given, so that it will be possible to continue the next match in the tournament at a later time.
‹
›
Home
View web version