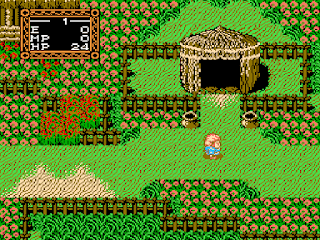 Genre: Action, Role-Playing (RPG)
Perspective: Top-down
Setting: Fantasy
Published by: Capcom U.S.A.
Developed by: Capcom Co.
Released: 1989
Platform: Nintendo (NES)
In ancient times, during the reign of magic and sorcery, the evil sorceress-queen Bavmorda ruled the lands. Naturally, everyone was afraid of her, but they hoped for a legend according to which a boy should be born in the village of Nelwyn, who would destroy the bloody ruler. And now this moment has come. The queen has already sent her troops, and the villagers stand up for the child. You are Willoy - the same child (who guarded you all the time before is not clear).
You will travel through mysterious forests and villages, you will hide from the army of the queen, you will collect items, weapons and armor, and most importantly - magic! It will come in handy in the final battle. The game is similar to The Legend of Zelda. I advise you to play, period.
Please note - the game of the same name on CPS-1 (arcade machine) has a different genre - platform arcade. There were also games on computers - Amiga, Atari ST and PC, but this is the third version of the game, also of a different genre.
‹
›
Home
View web version