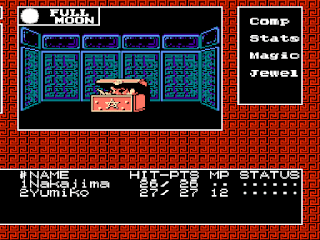 Genre: Role-Playing (RPG)
Perspective: 1st-person
Pacing: Turn-based
Setting: Cyberpunk / dark sci-fi
Published by: Namco Limited
Developed by: Atlus Co.
Released: 1987
Platforms: Nintendo (NES), Super Nintendo (SNES), SEGA CD / Mega-CD
The first game in the series, it started the MegaTen franchise as we know it. A remake with improved graphics, updated sprites and music was released on the SNES under the name Kyuuyaku Megami Tensei, which also includes Megami Tensei II. On June 18, 2020, Bandai Namco announced that Megami Tensei will be part of the third DLC wave for the Namcot Collection on the Nintendo Switch.

The game begins with the demon lord Lucifer kidnapping the goddess Izanami, after which a mysterious temple appears on the Shirasagi Mound. There he gathers his generals and an army of demons to conquer the human world. Nakajima, the school's computer genius, and his friend Yumiko descend into the labyrinth, armed with COMP and magic, with their loyal dog Cerberus, to defeat all the demons and their generals, and at the end fight Lucifer and banish him back to the Abyss.

It consists in clearing six huge dungeons, turn-based battles with demons, communicating with them, merging them into more powerful demons, buying equipment and leveling up, searching for quest items and defeating bosses, of which there are six, one per dungeon:
‹
›
Home
View web version