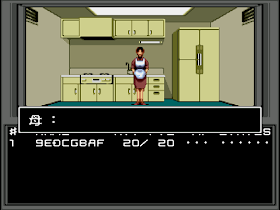 Genre: Role-Playing (RPG)
Perspective: 1st-person
Pacing: Turn-based
Setting: Cyberpunk / dark sci-fi, Post-apocalyptic
Published by: SIMS Co.
Developed by: Atlus Co.
Released: 1994
Platforms: SEGA CD / Mega-CD, Super Nintendo (SNES), Nintendo (NES)
Here lives a young man with his mother in one of the districts of Tokyo and did not grieve until that moment. And all because he began to have nightmares about how he runs around a different dimension, in some red maze, speaks with some spirit, meets with several people (including a mysterious girl). But it's good that mom woke him up. However, turning on the computer, you read that the city is in danger (yes that there is a city - the whole world) - and only you can help. Thinking that someone is joking, you go out into the street and suddenly find out about the murder in a park nearby. And you would have gone unnoticed by all this if you hadn’t had a device with you that allows you to communicate with demons. Now your role begins to clear up ...
The game is interesting in that it can be called to the aid of demons (but they require the mysterious energy that you can get after battles). By calling the demon, you can control it. Up to six warriors can fight (usually two heroes and 4 demons). Demons have various characteristics, individual abilities, etc. Turn-based battles, random enemies. An interesting element of the gameplay is the conversation with the demon: in order for him to join you, you need to persuade him by choosing the necessary answers in the dialogs.
In principle, the game is great. Sorry, the version is only Japanese. But for SNES English translation.
‹
›
Home
View web version