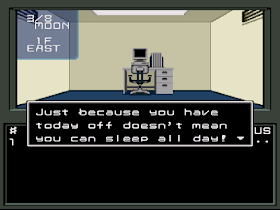 Genre: Role-Playing (RPG)
Perspective: 1st-person
Pacing: Turn-based
Setting: Cyberpunk / Dark Sci-Fi, Post-Apocalyptic
Published by: Atlus Co.
Developed by: Atlus Co.
Released: 1992
Platforms: Super Nintendo (SNES), SEGA CD / Mega-CD, Nintendo (NES)
The story begins in Kichijoji district, Tokyo. A high school student receives a Demon Summoning Program and discovers that the city is overflowing with demons. They were summoned from the Abyss by a certain Gotou, who foments a coup d'etat. In response, the United States sent an armed contingent; the clash between these two military forces would lead Tokyo to its destruction ...

Lead the hero through corridors and doors, and lead a team of five to battle the countless demons of Tokyo.
In addition to the hero, there are three human characters, who gain experience and spells over battles and levels gained. They can equip a sword, a gun, armor pieces. Their stats evolve as the player wishes but their spells are predetermined.
Some demons (generic term for "supernatural creatures") can be recruited and fight alongside heroes. They do not gain experience, their skills are fixed, and persuading them to join you is difficult and expensive. We must begin by entering a series of responses to their behaviors or questions and then buy their services, yet it is almost impossible to do without their help. When you have recruited two or more demons, you can merge them into a new demon.

None of Shin Megami Tensei's heroes has a predetermined name; it is the player who decides when he meets them in a dream.
‹
›
Home
View web version