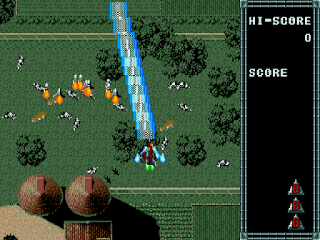 Genre: Action
Perspective: Top-down
Gameplay: Arcade, Shooter
Published by: Bignet U.S.A.
Developed by: Seibu Kaihatsu Inc.
Released: 1991
Platforms: SEGA Genesis / Mega Drive, Atari Jaguar, Arcade Machine
One of the games in the scrolling shooter series Raiden. In the future, alien forces have taken over the earth. To defeat them, the World Alliance Military is building a super new weapon Raiden. It is a supersonic fighter for surprise and daring attacks. As you probably already guessed, you have to perform in the religion of the pilot of this very fighter. You have to defeat the invaders. As with most of these games, weapons can be upgraded. In this game, it is improved to such an extent that various projectiles and explosions occupy the entire playing field. In addition to the good gameplay, you get nice graphics. The game is worth playing.
‹
›
Home
View web version