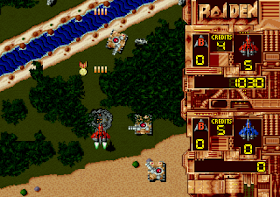 Genre: Action
Perspective: Top-down
Gameplay: Arcade, Shooter
Published by: Atari Corporation
Developed by: Seibu Kaihatsu Inc.
Released: 1994
Platforms: Atari Jaguar, Arcade Machine, SEGA Genesis / Mega Drive
The game Raiden refers to a series of popular scrolling shooters. The plot of the game unfolds in 2090, when the land attacked by aliens, representing the race Cranassians (Cranassians). The World Alliance Military is able to build a fighter called Raiden Supersonic Attack Fighter on the basis of an intercepted ship from the aliens. An interesting fact may be that in the Second World War, the Japanese had a fighter called Raiden. Just Raiden from the Japanese translate as "thunder and lightning." In the game you alone or together, but with a well-developed arsenal of weapons to confront the crowds of opponents, from tanks to space ships.
‹
›
Home
View web version