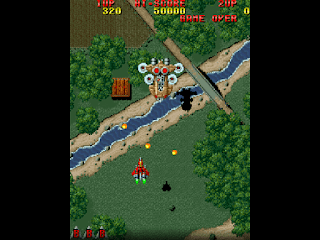 Genre: Action
Perspective: Top-down
Gameplay: Arcade, Shooter
Published by: FabTek
Developed by: Seibu Kaihatsu Inc.
Released: 1990
Platforms: Arcade Machine, Atari Jaguar, SEGA Genesis / Mega Drive
Raiden is a vertically scrolling Martian Killer game consisting of eight stages of increasing difficulty. In each stage, the player manipulates the Fighting Thunder ship, engaging various enemies and avoiding their attacks. In cooperative play, both players can generate special projectiles that damage their enemies by firing at the other player's ship. After completing the eighth and final stage, the player returns to the first stage with an increase in difficulty.
Collectible items include bombs, which cancel enemy fire and deal damage over a large area; weapon enhancers; and rising score medals. There are two collectible bonus items: the Miclus (a boss in the 1985 game, Wiz from Seibu Kaihatsu) and a fairy that unleashes item boosters when the player dies.
When the player dies, the shrapnel from the ship turns into projectiles that damage enemies. If all lives are lost during a game session, it is Game Over unless players insert more credits into the arcade machine to continue playing. If continued, the player will start at the last assist point achieved.
‹
›
Home
View web version