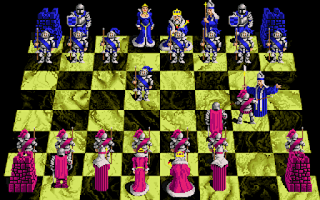 Genre: Strategy / tactics
Perspective: Top-down
Pacing: Turn-based
Gameplay: Board game, Chess
Setting: Fantasy
Published by: Interplay Productions
Developed by: Interplay Productions
Released: 1989
Platforms: DOS, 3DO Interactive Multiplayer
A completely difficult computer chess simulator in which chess comes to life and comes into confrontation with each other. Usually these games require a lot of logic, and perhaps therefore, their graphical environment leaves much to be desired. But this game is an exception and a direct proof that you can move chess beautifully. The game features funny animation. On the screen, we see a chessboard in perspective, on which the classic chess pieces are located. Before removing the figure, there are short fights ... However, there are no hints of arcadeness. It would probably be fair to say that moving ordinary chess would be easier and faster. Players will spend some time studying the figures - they are peculiar. The next disadvantage is the perspective itself. It is very inconvenient to look at the figures from the side. However, you can switch to the top view, but then it will definitely be just chess. The embedded animation is also time-consuming. After all, watching the tenth time how the rook gets rid of the pawn is no longer interesting. However, you still get a certain aesthetic pleasure. The game has an editor that allows you to arrange the figures at your discretion. Other players or the computer can act as opponents. A fun game, especially if you already know how to play chess.
‹
›
Home
View web version