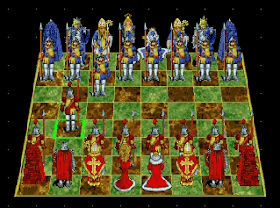 Genre: Strategy / Tactics
Gameplay: Chess
Setting: Fantasy
Published by: Interplay Productions
Developed by: Interplay Productions, Krisalis Software Ltd.
Released: 1993
Platforms: 3DO Interactive Multiplayer, DOS
Battle Chess for 3DO Interactive Multiplayer is a chess game in which combat figures come to life and fight, with each other all this is done in a medieval entourage. Most of the figures are people, except the rook. All the rules are exactly the same as in chess. But the king can not capture the king. All actions occur in pseudo 3D with isometric tilt, as well as using the zoom effect. A total of 35 types of animation battles. The rook turns into a monster of rock (rock monster). In the battle of some figures, you can draw an analogy with the battles of the films "Monty Python and the Holy Grail", "Indiana Jones: The Raiders of the Lost Ark." The game gave birth to many similar games, such as the game Star Wars Chess for Sega Mega-CD. In the game there is a mode and 2D boards with clear figures, just on it you can work out various combinations. Fight with the artificial intelligence of the game console, or call a friend on the battle. Well, if you are too lazy to play yourself, you can fight the "Computer" (CPU) to fight with yourself, and watch from the side for the battle of chess. The game has 9 difficulty levels.
‹
›
Home
View web version