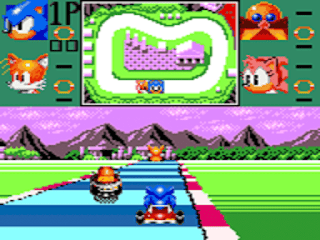 Genre: Action, Racing / driving
Perspective: Behind view
Art: Anime / manga
Gameplay: Arcade
Published by: SEGA Enterprises Ltd.
Developed by: SEGA Enterprises Ltd.
Released: 1994
Platform: SEGA Game Gear (GG)
Sonic Drift is an arcade racing game in which the player has a choice of four characters, each with their own vehicle and unique abilities. According to the plot of the game, Dr. Eggman kidnapped the Chaos Emeralds for his evil purposes. Sonic must win three different grand prix to win them back.
The game features a mode called "Chaos GP", in which you need to win three different grand prix, for completing which the player receives Chaos Emeralds in green, yellow and red. Each Grand Prix has six tracks, which are based on the game Sonic the Hedgehog (Green Hill, Marble, Spring Yard, Labyrinth, Star Light and Scrap Brain), with different turns and obstacles. The player is given four characters to choose from: Sonic, Tails, Eggman and Amy. Each participant in the race has his own vehicle: Sonic - "Cyclone", Tails - "MTP-01 Whirlwind", Eggman - "Egg Typhoon", Amy - "Breeze", all of which differ in speed, acceleration and handling. So, "Cyclone" has good speed and acceleration, but poorly controlled; MTP-01 Whirlwind handles better, but has a slower speed; Egg Typhoon has high speed but slow acceleration; The Breeze has good acceleration but low speed. Competitors also have unique abilities that can be used in races for every two rings they collect; Sonic can accelerate for a short time, Tails can jump up and gain speed faster, as well as automatically go through turns, Eggman can drop a bomb, upon collision with which the opponent stops and loses the ring, and Amy can drop a heart, upon collision with which the opponent loses speed.
On the tracks, there can be rings, as well as bonus items: a red monitor, similar to Sonic's ability, allows you to get additional speed; the blue monitor allows you to get invincibility, thanks to which the player is not afraid of obstacles; the spring, similar to Tails' ability, allows you to bounce, increase speed and automatically take turns. If during the race the character crashes into an obstacle or his opponent, then he loses speed and ring. If you brake during turns, the vehicle will skid, and if you turn strongly, this leads to a loss of speed. For the first place in the race, the player receives three points, for the second - two points, for the third - one point, and for the fourth - zero points. These points are added up after completing each route. The participant with the most points for the grand prix wins and receives the Chaos Emerald. If the player wins all three competitions, then he sees the ending of the game and the credits of the developers.
‹
›
Home
View web version