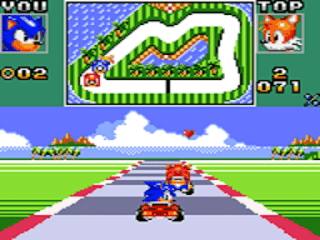 Genre: Action, Racing / driving
Perspective: Behind view
Gameplay: Arcade
Vehicular: Automobile, Track racing, Vehicle simulator
Published by: SEGA Enterprises Ltd.
Developed by: SEGA Enterprises Ltd.
Released: 1995
Platform: SEGA Game Gear (GG)
Four of the seven characters Sonic, Tails, Amy, Dr. Robotnik, Knuckles, Metal Sonic and Fang carry out car races in their vehicles with various advantages and disadvantages. Sonic drives a red and white sports car called The Cyclone, which is very fast but difficult to control. Tails' vehicle is a Formula 1 car from the 1960s with the name MTP-01 Wheelwind, which is balanced by the attributes, while Amy's convertible The Breeze is easy to control at the expense of speed. Dr. Robotnik's Egg Typhoon has a high top speed, but it is the easiest to get off the road, whereas Knuckles' vehicle Tempest is balanced. Metal Sonic drives the fastest of all characters with the Blue Devil, but also has the worst handling and Fang's car bears the name Marvelous Queen, which is relatively balanced with a slight tendency towards speed to minimal loss of handling.
At the push of a button, you accelerate or brake and steer with the control pad. On the racetrack there are rings, red monitors (increases the speed for a short time), blue monitors (short-term invulnerability), springs that briefly throw the driver and his vehicle into the air, yellow monitors (identical to springs), black monitors (put one Mine on the track), reverse balls (briefly left and right are swapped on the controls) and stars (makes the screen white for everyone). If a character collects two rings, he can use his respective special ability: Sonic the Speed ​​Dash (identical to the red monitor), Tails the Jump over (identical to the spring item), Amy the Toss Heart (reduces the speed of the opponents), Dr. Robotnik the Drop Mine (same effect as with a collision), Knuckles the Punch (effect like a collision for nearby enemies, otherwise identical to the spring item), Metal Sonic the Super Speed ​​Dash (extremely increased speed, costs Metal Sonic but always three rings) and catch the Sling Oil Balls (same effect as in a collision)
In the single player mode there are three so-called Chaos Grand Prix, sorted according to the colors of the purple, white and blue Chaos Emerald. Each Grand Prix consists of six different tracks, some of which represent zones from Sonic the Hedgehog 2 (Emerald Hill Zone, Hill Top Zone, Casino Night Zone, Mystic Cave Zone and Death Egg Zone) and Sonic the Hedgehog 3 (Ice Cap Zone) or created from scratch (Dark Valley Zone, Desert Road Zone, Iron Ruin Zone, Rainy Savanna Zone, Quake Cave Zone, Balloon Panic Zone, Emerald Ocean Zone and Milky Way Zone). Three laps are driven per route. According to the placement, points are distributed, which are added up at the end. When Sonic, Tails, Knuckles or Amy have solved the last Grand Prix, there will be a final race against Dr. Robotnik. When Dr. Robotnik, Metal Sonic or Fang have solved the last Grand Prix, there will be a final race against Sonic.
‹
›
Home
View web version