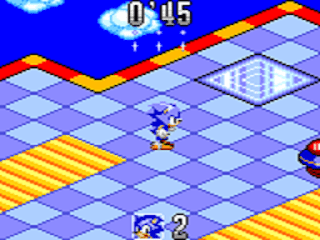 Genre: Action
Perspective: Bird's-eye view
Visual: 2D scrolling, Isometric
Gameplay: Arcade
Published by: SEGA of America
Developed by: Minato Giken
Released: 1995
Platform: SEGA Game Gear (GG)
According to the plot of the game, Dr. Robotnik stole the Chaos Emeralds and changed Sonic's shoes, because of which the hedgehog lost his high speed and decides to return the Chaos Emeralds and boots. Sonic Labyrinth is made in isometric graphics, and in terms of levels the player needs to destroy enemies and collect keys to complete the playing zones.

Sonic Labyrinth is an isometric puzzle game. According to the plot of the game, the villain Dr. Robotnik stole the Emeralds of Chaos and changed Sonic's shoes for another pair, because of which the hedgehog lost the ability to run and jump quickly. The main character intends to return the Chaos Emeralds with his boots and defeat the scientist.
The game features the "Normal Game" mode, in which the player will have to go through four labyrinth levels ("Labyrinth of the Sky", "Labyrinth of the Sea", "Labyrinth of the Factory" and "Labyrinth of the Castle"). The first two are divided into three zones, while the rest are divided into four. At some levels, there may be chasms, falling into which life is lost. Sonic in the game cannot jump, but he has the ability to spin dash, which allows you to accelerate, curling up into a ball, and also serves to destroy enemies. There are three keys scattered across the levels. After the player has collected all the keys, he must enter the door on the level with the inscription "Goal" to complete the passage of the location. If the character is attacked by the enemy, then he loses the keys, and if he did not have them, then life or time is lost. There may be glowing icons on the levels, when collected, you can get invulnerability, extra life, and more. There is a limited time to complete the zone, which can be increased by collecting keys. On the last zone of the level, there is a battle with the boss. Before the battle with the villain, the character rolls along an inclined surface, where you need to collect rings, dodging obstacles. When collecting 100 rings, the player gains an extra life. After defeating the boss, Sonic receives the Chaos Emerald.
There is a bonus stage in the game, at which the player has to collect the remaining Emerald of Chaos, the presence of which opens a good ending. In order to get to this level, you need to find in the second zone of the "Labyrinth of the Sea" level, a button that opens a door with the inscription "Bonus". At this level, you need to have time to pick up the Chaos Emerald in 30 seconds. As with the boss fights, the Bonus Stage also features rings. For every four rings, the player gains an extra life. If the character falls into the abyss or the time runs out, he returns back to the "Labyrinth of the Sea". If the player sees a bad ending after completing the game, he will notice a hint of where the bonus level can be found.
In addition to the "Normal Game", the game has a "Time Attack" mode, in which the player needs to complete the level, showing the best time result. In the "Config" mode, the player can choose the number of lives, listen to music and change controls.
‹
›
Home
View web version