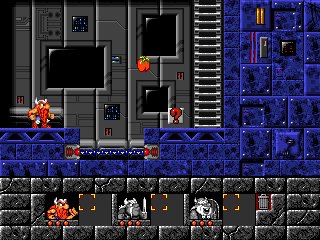 Press ENTER key on Protection screen.
Genre: Action, Puzzle
Perspective: Side view
Visual: 2D scrolling
Gameplay: Platform
Setting: Fantasy, Sci-fi / futuristic
Narrative: Comedy
Published by: Interplay Productions
Developed by: Silicon & Synapse
Released: 1993
Platforms: DOS, Super Nintendo (SNES), SEGA Genesis / Mega Drive
Three Vikings accidentally found themselves on an alien spaceship. And you are entrusted with the task of returning them to their native lands.
The gameplay is best suited to the definition of an arcade / puzzle platforming game. The task of each level is to bring all three characters alive to the exit. To achieve this goal requires extraordinary coordination and intuition to use the various abilities unique to each of the three Vikings. Eric can jump, run fast and knock his head through brick walls. Olaf carries with him a huge shield, which, in addition to protecting against blows, he can use as a parachute or lift one of his comrades on it. Baleog can shoot a bow and swing a sword dashingly. The bow, in addition to killing opponents, can also be used to switch distant levers. You will have to use the trinity as one team if you intend to make your way through the ever-increasing difficulty of levels and puzzles.
Fortunately, not everyone in the environment is hostile to the Vikings. Buttons with prompts, scattered across the levels, sometimes help to get out of the most insoluble, at first glance, situations. Each Viking has a health bar that shrinks when damaged, and can be restored by collecting and eating fruits scattered throughout the levels.
Puzzles don't have a single correct solution. You can, hiding behind Olaf's shield, shoot enemies with a bow, or you can just jump over them with fast-footed Eric, hoping that the aliens will not send him a couple of shots after him.