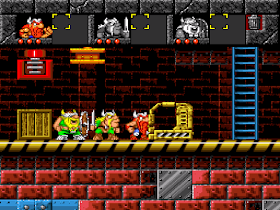 Genre: Action, Puzzle
Perspective: Side view
Gameplay: Platform
Visual: 2D scrolling
Narrative: Fantasy, Sci-Fi / Futuristic
Narrative: Comedy
Published by: Interplay Productions
Developed by: Silicon & Synapse
Released: 1993
Platforms: Super Nintendo (SNES), SEGA Genesis / Mega Drive, DOS
It was at night. Deep at night somewhere in the beginning of the first millennium of our era. Aliens abducted the three sleeping Vikings, and this was their biggest mistake. Eric Weatherhat, Baleog The Fierce and Olaf the Stout well-trained warriors and in the end they will return home. This is an excellent game that is recommended for everyone. The plot is simple - to hold all three Vikings and to the next level. Each character can do something of his own, so that a fun team game is provided.
‹
›
Home
View web version