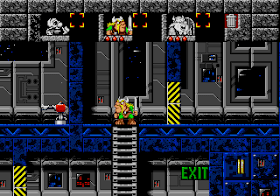 Genre: Action, Puzzle
Perspective: Side view
Visual: 2D scrolling
Gameplay: Platform
Setting: Fantasy, Sci-Fi / Futuristic
Narrative: Comedy
Published by: Interplay Productions
Developed by: Silicon & Synapse
Released: 1993
Platforms: SEGA Genesis / Mega Drive, Super Nintendo (SNES), DOS
Very attractive game! Pleases almost everything: gradually increasing from barely noticeable to almost insurmountable complexity of levels, an abundance of brainwashing situations and, at the same time, the dynamics of what is happening, quite acceptable graphics, as well as cool dialogs of cool characters. And, importantly, the presence of a password system and small levels of levels - this allows you to interrupt the passage of the game at any time and the next time you start it quickly restore the previously achieved result.
Unfortunately, no matter how many creators shove the levels in such creations, sooner or later the end comes, and the second time it's boring to play. At least in the near future. I recently got a version of the Vikings on SEGA Genesis in my hands, and I was surprised to find that when I started it, it's still difficult for me to tear myself away from this fascinating process, as before. Another surprise - no graphics, no sound, it is not inferior to its PC analogue. A second background appeared. the melodies almost got rid of the monotony that had previously reached us. Yes, and manage the game from the joystick was much more convenient than with the keyboard. There were new levels, which were not in the versions of the game for SNESa and DOS!
Since it is possible to guide three Vikings through a dreadful labyrinth to the exit, only combining them into one team, using with all the complementary abilities of the heroes at the same time. And it's even more interesting (and harder!) To coordinate their actions with a friend. On the switching between the characters while spending less time, which is important in the battle with the enemies.
Before starting the game, it will be useful for you to see the start intro. In it you will not only get acquainted with the story of the abduction of three Viking friends by the owner of the interplanetary zoo, but also see a fragment of their successful hunting, from which you can find out almost all the applications of the abilities of the heroes. What's especially cool is the unique learning ability of the game: before you ask the player to perform an action for the first time, the game will first tell you which combination of buttons it is called!

B in the menu - transfer items to nearby characters or trash can;
C - conversations with the civilian population and pressing buttons;
Start or Mode - pause in the game and enter the inventory menu;
C + Start or Y - use of the object selected by the frame;
Start + sideways or X and Z- switch between characters;
A + Start or just Start - the ability to re-start the choked level.

Erik. He runs fast, knows how to break through the walls, folded out of gray blocks and maim enemies (on the run, press A). Shots can be jumped (button B).
Hint: with a running jump jump is obtained above.
Olaf. He has a shield. So, there is an opportunity to keep the defense in battle with most of the reptiles. Watch your rear, do not land in the midst of enemies without Baleog's fire support. Buttons A or B can raise the shield above your head and use it to plan or serve as a stand for friends.
Hint: the shield is covered with iron ...
Baleog. Liquidator. Without his sword (button B) and arrows (A) you can not stand no one in a serious zavarushke. Yes, and switches at a distance to switch more than a dozen times have, again through arrows.
Hint: the arrow flies until visible on the screen.
To complete the level of ALL, the Vikings must get to the EXIT or door-teleporter door alive. The role of the stairs in the game alternately perform gratings. trunks of trees and some pipes. Climb on them by vertical pressing the joystick. Each hero can carry up to four items. If you see a prize surrounded by bare walls - boldly look for a secret passage (not necessarily horizontal). At the factory this is very useful!
In search of a native village, your wards will conquer more than one world. each of which is divided into several (from 4 to 9) levels and differs by enemies and types of puzzles. In the end, you will have to defeat the evil Tomator in three rounds by each of the Vikings separately, and then - all together! As a result, an evil alien will be at the hatch of his ship, and you will only have to throw it into space by gentle pressing the lever.
‹
›
Home
View web version