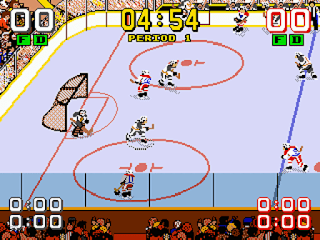 Genre: Sports
Perspective: Bird's-eye view
Visual: 2D scrolling
Sport: Hockey
Published by: SEGA of America
Developed by: Alpine Software
Released: 1991
Platform: SEGA Genesis / Mega Drive
One of the first hockey game on this console dedicated to the legend of Canadian hockey Mario Lemieux. Old graphics by today's standards in 1991 nevertheless attracted many fans of this genre. Playing this hockey is pretty easy, so it's more of an arcade game than a simulator. If you do not want to bother for a long time over who to release on the ice, to deal with a lot of statistics, then this game is for you. Of the pleasant surprises, the game has a fight mode. Where you can kick a player from another team in the face. Such a mini fighting game. And then there is the Shootout mode - something like a penalty.
‹
›
Home
View web version