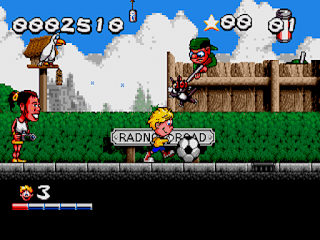 Genre: Action
Perspective: Side view
Visual: 2D scrolling
Gameplay: Platform
Published by: OlderGames
Developed by: Cartoon Mavericks
Released: 2003
Platform: SEGA CD / Mega-CD
Marko's Magic Football follows a boy soccer player who accidentally finds out about a sinister conspiracy. Colonel Brown, hiding behind a toy factory, invented a liquid that turns all living things into green monsters. Marco saw someone pouring this drug into the city sewer. Quite by accident, his ball got there, he acquired some abilities and became magical. Now Marco has to stop him. Using your ball to destroy enemies in the level. You can call the ball at any time convenient for you. Quite a beautiful platformer with good graphics and animation, which is important enough humor in it. In the US, the SEGA-CD version of the game was not quite officially released, and many years after the release, under the name Marko.
‹
›
Home
View web version